Back in 2016 I was approached by Dave Taylor, admin of the Eavier Metal Facebook group, and asked if I would be interested in judging a competition he was organising as an offshoot of his "Throwback Thursday" slot in the group. The competition would be to paint miniatures that were at least 20 years old. I said I'd be honoured to do so and thus my fate was sealed. the 20 Year Challenge would go on to be an annual thing from then on. It's even made it into the illustrious pages of Fantasy Figures Internatonal! 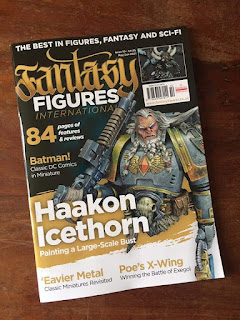 The first year we really didn't know what to expect, and the turnout was much better than we'd thought it would be. We hadn't really bothered laying down any "proper" rules so the field was wide open, leading to some major headaches when it came to judging.

This time, we decided to place a restriction on the maximum base size, to make it more of a level playing field, and to make it easier to do the judging. While it helped with the former, it really didn't help with the latter!

2018
This year, as we'd been getting such a large variety of models and, again, in an attempt to make the judging process a little easier, we decided to split into two categories. I mean, in one regard it made it a little easier to sort through things, but it also meant I had doubled my workload when it came to making decisions! Also, apparently, this would turn out to be the year of the troll. I have no idea how that happened.
2019
People were getting used to the idea of this being an annual event by now, and were better prepared  when the time of the competition came around again. This meant a large jump in the amount of entries.
2020
We were really getting into our stride with the competition now. The categories and limitations had been nailed down for a couple of years, and we kept them the same to ensure as little confusion as possible.

So there we have it, all the winners from the last seven years (and apologies if I've spelt anybody's names wrong!) Farewell to the 20 Year challenge, and welcome to the 20th Century Challenge! And, if you want to have a go at this year's competition, head on over to the Eavier Metal Facebook page and look for Dave Taylor's post with the rules. A couple of words of advice if you do feel like giving it a go: as this is an online competition, I don't have the luxury of having the models in-hand when it comes to judging them so good photos are essential. There's plenty of guides to photographing models online (Garfy's one over on Tale Of Painters is very good) and good results can be had with a good light and a decent mobile phone. Don't forget that you can upload more than one photo of your entry so, if there's a particularly great bit of it you want to show off, take an extra photo focusing on that bit. Also make sure you are following the rules. I try not to be too militant when it comes to applying them but lines eventually have to be drawn and it's heartbreaking to see a beautiful piece of work get pushed aside because the painter didn't follow the rules. There's not many rules in this competition, so following them shouldn't be hard. And that's it. I very much look forward to seeing what you all come up with and having a couple of stressful evenings going through what's entered. And good luck!
Thanks for reading!
Stu
p.s. if you like what I'm doing here, a click on the link below and the donation of the price of a pot of paint would be a wonderful gesture. I'm thinking of adding special stuff to the Ko-fi, like competitions and prize draws, so it'd be a good idea to at least have a look there now and then 😁