The other day, after a session of Die Rolling, Ollie (Nolus in the campaign) announced his interest in getting into Warhammer 40,000. I agreed that would be a thoroughly excellent idea. Two days later, he messaged me to say he'd bought a squad of Cadians and a Chimera. Not wasting any time, then...
I thought it would, therefore, be the perfect time to do up a quick painting guide, to help my friend get his models ready for playing...
This one's for you, Ollie!

I've mostly stuck with the colours used in the Citadel Paint App, except I've used Wraithbone instead of Grey Seer for the primary basecoat as I think it'll be a better match for the predominantly sand and green colour scheme, and I've used Militarum Green, rather than Creed Camo, on the armour.
So, the colours you will need are:


1. After priming the whole minature with Wraithbone Spray, all the fatigues were painted with a single coat of Aggaros Dunes. If you spill over to other areas, don't worry too much. Large spills can be lifted out by using a dry brush, smaller ones can be painted over later. The important thing is to make sure you get a good, even coverage over the whole area, with no missing spots as, with Contrast paints, it's really difficult to go back and get any bits you've missed, once they're dry.


2. The next stage is to paint all the armour areas with Militarum Green. I'd suggest adding a little bit of Contrast medium (maybe 5:1 paint:medium) to the paint here, as the darker Contrast Paints can be a little too opaque sometimes. You will need to be a little more careful that you don't get any paint on the bits you've already painted, as it'll be a right pain to correct any mistakes after. If you do need to correct any mistakes, re-apply the Wraithbone base using the Base Paint before re-applying the Aggaros Dunes.


3. Now you're going to want to put a coat of Grey Seer on all the bits that are going to be black, grey or white. This will give a better base for the following colours to work over. Paint a coat of Apothecary White over the insignia, Basilicanum Grey over the metal areas and Black Templar (again, you may want to add a touch of Contrast Medium to the paint) over the boots and belt. Metal areas are then given a coat of Leadbelcher.


4. To do the face and hands, you may need to re-establish the undercoat of Wraithbone using the Base paint. Once that has dried, paint over it with a coat of Guilliman Flesh, a coat of Gore Grunta Fur on his hair, and you're done.


5. Finally, to finish off, I've painted the base on this one with Astrogranite and edged it with Abaddon Black. I recommend giving the finished miniature a coat (or two) of varnish to protect the paintwork, as contrast paints rub off easily. 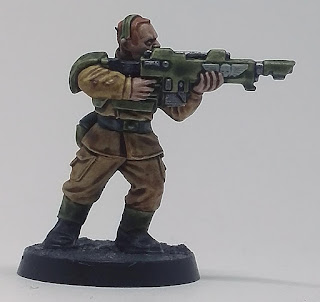 And there you have it. Just an hour, including assembly time, and he's done, ready to be used on the battlefield. It won't win any Golden Demons, but it's perfectly good to play games with. Only another 399 to do and you have the entirety of what remains of the Cadian Army ready to go...*

I have more painting guides planned and, if you have any other miniatures you'd like me to do a similar guide for (or more detailed guides), please let me know.
Thanks for reading!
-Stu