A little bit of yellow, and a bit of amber...

A little while back I was approached by a chap called Anthony Mallett who is working on a pitch for a TransFormers tabletop game. He's hoping to be able to pick up an official licence from Hasbro and, to support his pitch, he's prepared some prototype miniatures and asked if I'd mind painting some of them up for him.
Well...
I've been a fan of TransFormers since they first arrived on the scene back in 1984 (when I was, at 11 years old, the perfect age to get hooked on the adventures of giant robots...) and have often wished for a tabletop game based on the franchise. Back in the distant past, whilst at the GW design studio, Richard Potter and I would dream of, one day, putting together a set of rules. Alas, this was just a dream that would never come to fruition. Anthony and his group, however, have pushed their version of the dream forward, and have got quite a long way down the path to a finished product. Whether it goes the distance and becomes a finished licensed product is down to their negotiating skill and the will of the Hasbro licencees but, when Anthony approached me, I couldn't refuse the opportunity to get involved right from the start.
So, a batch of metal prototype miniatures turned up and, while I'm still busy working through my backlog of commission projects that has built up during my personal upheavals of the past year, I just had to have a go.
So, here's the fruits of a few hours' labour (usually while waiting for other things to dry). Bumblebee is the smallest of the figures Anthony sent to me (30mm to the tips of his little horns), and the only one that is a single-piece casting. I'm told that these metal miniatures are test castings from the 3D print masters (or somesuch- it's all a little over my head...), and that the final miniatures will be moulded in plastic, with crisper detail. I think he looks pretty good as he is, and is certainly a pretty good representation of the original animation design. 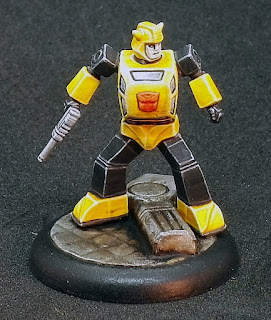 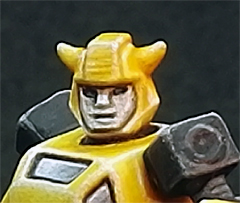 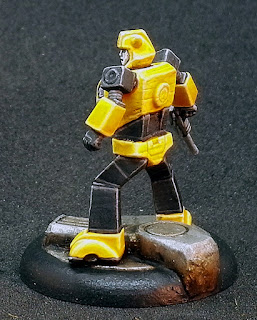 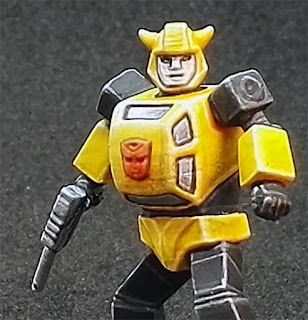 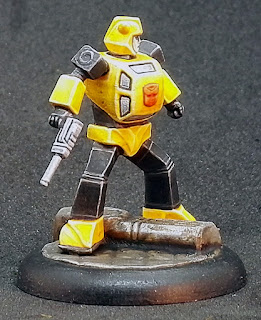 (The base, in case you were wondering, is some textured plasticard and a bit of Zoid...)
More info about the progress of the game itself can be found on their Facebook page. I really hope it does well.

Next up, and back within my usual comfort zone, is one of the aforementioned backlog. This one is the Amber Wizard from Citadel, from pre-End Times Warhammer Empire. This was one of the early Finecast models and, as such, had a fair amount of gap-filling to be done, but the casting wasn't as bad as some of the horror stories I've heard of the material. I've stuck fairly closely to the original colour scheme on this one, the only addition being some slate to enhance the base. I wanted to lift him a bit and enhance his reaching-forward pose. I've got a few more of these old Empire (now Free Peoples in the Age of Sigmar) to do and I'm rather looking forward to them. 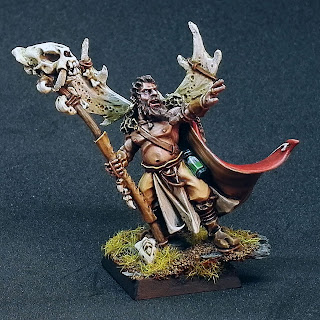 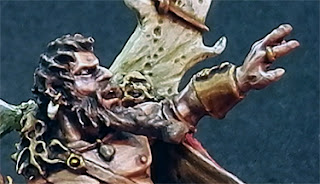 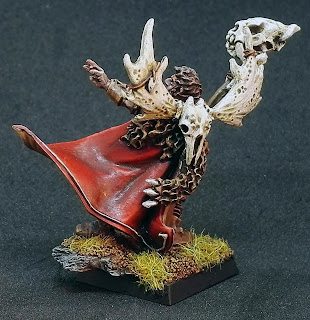 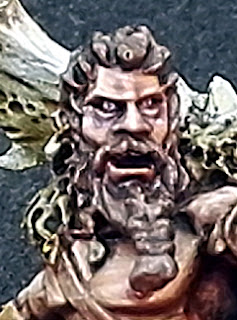 Right, that's it from me for now. I've got a big update on the Eldar Phantom Titan coming up very soon so be sure to check back for updates.

All the best,
Stuart

Posted by Stuart Thomas at 23:57 No comments: Links to this post