It's Not Just Big Robots, You Know...

A few weeks back, I showed you the colours I used on the Botwars Beastlords. They are some of the larger miniatures in the game and, this time, I'm going to be looking at some rather smaller ones. For those who don't know, Botwars is a 10mm skirmish wargame, produced by Traders Galaxy, that is set in an alternate reality 1980's and features giant robots, military and sci-fi vehicles, some of which will be somewhat familiar to anyone who grew up in the real world version of that decade*. I recently painted a set of the Democracy Special Branch army deal and I thought I'd give an overview of the paints I used and a couple of bits of advice for painting models like them. 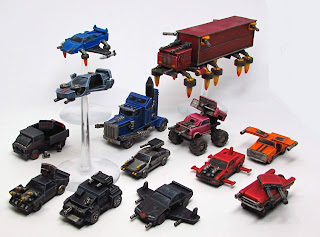 The Botwars vehicles are mostly single-piece resin castings (although some of the larger ones come in more pieces) and the castings are crisp and sharp and contain just the right amount of detail for miniatures this size and the quality of the castings makes them easy and satisfying to paint.

When painting military models on this scale, you can normally get away with a basecoat, drybrush and pinwash but, as these models are based on street vehicles, with much more bright colours often on show, I felt a slightly more detailed approach was necessary, so they were given the sort of techniques usually reserved for larger scale miniatures.

There's two very important things to be mindful of when working at this scale (remember, most of these cars are less than 2cm long...) and at this level of finish. The first is to make sure your edge highlighting is very fine and precise, and that your blends are smooth end even. Also, don't be afraid to have quite a stark contrast between the darkest and lightest colours on any given area, as this will help to give the impression of scale. However, large jumps between colours or thick edge highlights will throw off the sense of scale and leave the end result looking messy, which is why it's important to keep things tidy. It's worth taking the time to be careful how you apply your layers to get a neat, smooth finish. I spent a couple of hours on the main body panels of each of these vehicles to get them the way I wanted, before finishing them off with the generic details, such as windows, tyres, etc. 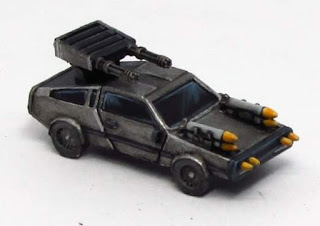 Over a black undercoat, I painted a coat of Leadbelcher, followed by an all-over wash of Nuln Oil. This was then highlighted with Leadbelcher followed by Ironbreaker, with an edge highlight of Stormhost Silver. 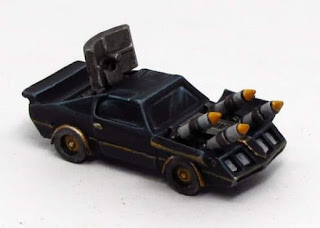 Over a black undercoat I blended a highlight of a mix of Abaddon Black and Dark Reaper, followed by highlights of Dark Reaper, Thunderhawk Blue and a final higlight, just on the edges of the roof, spoiler, etc. of Fenrisian Grey. The gold was Retributor Armour highlighted with Auric Armour Gold. 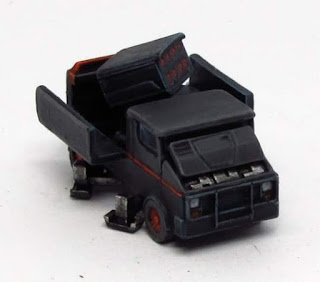 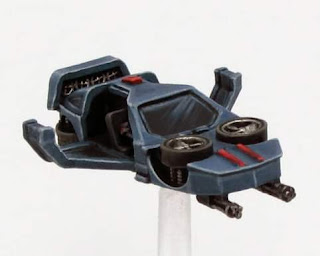 I initially made the mistake of painting this black, as I used the wrong reference image, so it has a black undercoat. This one had a basecoat of The Fang, which was highlighted with Russ Grey, then Fenrisian Grey and a very fine edge highlight of Corax White. 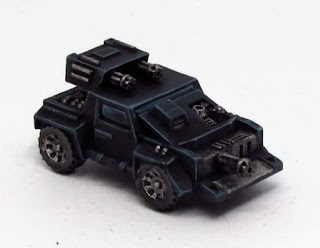 As with the Phoenix, over a black undercoat, a highlight of a mix of Abaddon Black and Dark Reaper, followed by highlights of Dark Reaper, Thunderhawk Blue and a final higlight, just on the edges of the roof, etc. of Fenrisian Grey. 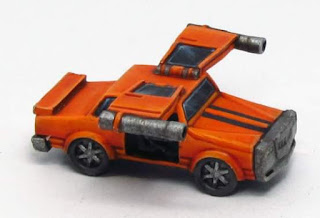 Over a white undercoat, I applied a basecoat of Gryph-Hound Orange (contrast) which was highlighted with Fire Dragon Bright then Luggunath Orange before being given a glaze of Cassandora Yellow. 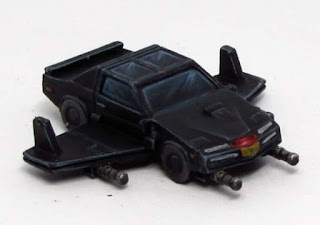 The black bodywork on this was done exactly the same way as the Phoenix and Interceptor. The glowing scanner on the front was done with Evil Sunz Scarlet, highlighted with Dorn Yellow then White Scar. This was glazed with Bloodletter, and a couple of glazes were also applied to the surrounding area to give the glow. 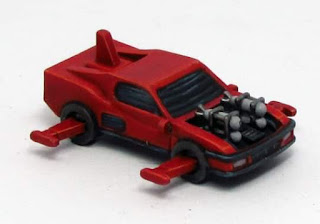 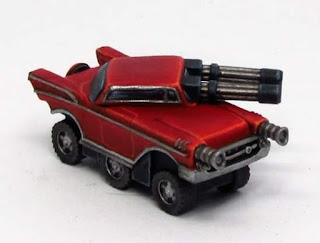 A slightly darker red on this one, which was started with Flesh Tearers Red (contrast) over a white undercoat. This was highlighted with Mephiston Red then Wild Rider Red, Fire Dragon Bright and an edge highlight of Fire Dragon Bright/Dorn Yellow mix. This was then given a glaze of Bloodletter/Carroburg Crimson mix. 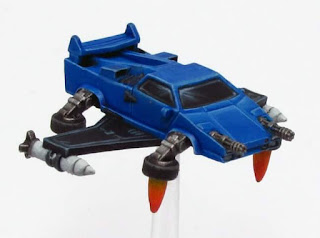 Over a white undercoat, a basecoat of Thallasar Blue (contrast) was followed by highlights of Caledor Sky, Teclis Blue, Lothern Blue and a final edge highlight of Blue Horror. The jet flames were glaze with a wash of Casandora Yellow. This was then glazed with a couple of coats of Bloodletter, making sure most of the red was concentrated at the bottom. A light drybrush of Mephiston Red was done on the tips. 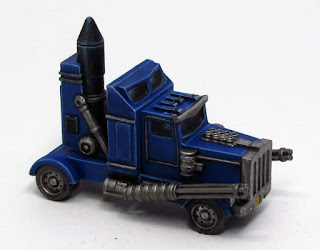 Again, over a white undercoat, I applied a basecoat of a mix of Thallasar Blue/Ultramarines Blue (both contrast) which was highlighted with Macragge Blue, followed by Altdorf Guard Blue then Calgar Blue, with a final edge highlight of Blue Horror. 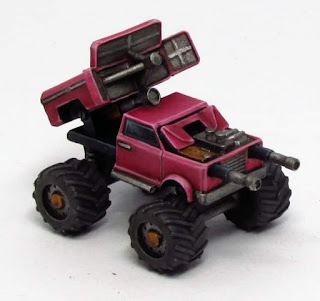 Over a white undercoat, a base coat of Volupus Pink (contrast) was given highlights of Pink Horror, then Emperor's Children followed by Fulgrim Pink. This was finished off with a glaze of thinned Carroburg Crimson. 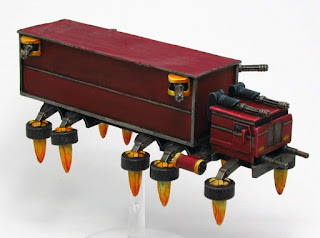 Saving the biggest for last! Over a white undercoat, I started with a coat of Flesh Tearers Red (contrast). This was given a basecoat of Khorne Red, leaving the basecoat only showing in the recesses and gaps. This was then highlightednwith Wazdakka Red, followed by Squig Orange and Fulgrim Pink. I then glazed this with a couple of coats of thinned Carroburg Crimson. The jet flames were done the same way as with Airblade.

And that's the lot! How many did you recognize? I hope these guides were useful.

*A point for each one you recognise...

**The temptation was to paint this one gold. A bonus point for you if you know why...