White Dwarf issue 452 and other stuff.

As I'm sure you're already aware, earlier this week Games Workshop, in light of the ongoing global situation, cancelled this year's Warhammer Fest which means no Golden Demon. I had kept my fingers crossed that such a measure would not be necessary as the event was still more than six weeks away, but it looks like that was a forlorn hope. However, I am still going to carry on with my entry in case the event gets rescheduled for later in the year.
With the cancellation of the event (and Adepticon with the associated US Golden Demon) GW have announced that the big reveals that were to take place at the events will, instead, be revealed online so mark these dates: Saturday 28th March at 14:00GMT and Saturday 4th April at 14:00BST to see what's coming up. they've also promised that there will be some way of getting hold of the event exclusive miniatures too so fingers crossed for that. Plus, Warhammer Community is now on Twitter, so check it out here and see what they are up to.

There is a little good news for us hobbyists, though! The new White Dwarf is out! So, if you need some shut-in reading, here's what to find within this bumper-sized issue: 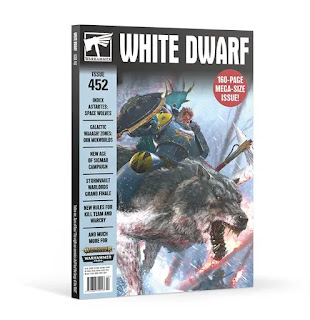 WARHAMMER 40,000
Echoes From The Warp. Elliot Hamer looks at matched play and narrative play games.
Index Astartes: Space Wolves. A detailed look at the history of the chapter and its culture, with new rules, a detailed painting guide and a look at some of the staffers' models.
Galactic Warzones. It's Waaagh! zones this time, with a look at Ork Mekworlds. Some interesting ideas and some great conversions on show.
Kill Team: A Mysterious Menace. New rules for using The Archivist, the new Zoat(!) character from Blackstone Fortress.
Talons Of The Emperor. Jason Lee's stunning Custodes army.
Journey's End. A Custodes short story set during the Indominatus Crusade, by Dirk Wehner.
Blackstone fortress: Alien Intelligence. the hunt for a lost Jokearo means a new mission and new rules.
Adeptus Titanicus: Two new narrative missions and a guide for creating your own.

WARHAMMER AGE OF SIGMAR
Rules Of Engagement. Jervis Johnson riffs on an old idea to create a new campaign system.
Land Of Dead Heroes. A full campaign set in the land of Hellost.
A Tale Of four Warlords. An immense battle report brings this year-long series to a close. There's also warscrolls for the converted Squig-Shamans used by Ben Johnson.
Warcry: Lord Of The Pits. A new campaign for the Spire Tyrants.
Glory Points. Dave Sanders looks at the different ways to play Warhammer Underworlds.

OTHER STUFF
Worlds Of Warhammer. Jordan Green talks about establishing a background for your collection.
Black Library: A Return To Holy Terra. An interview with author Graham McNeill
Faith & Fire. Part two of the serialised story by James Swallow.

So, once again a packed issue. A little light on painted miniatures for my liking, although the Custodes army is worth a look. The high point of the magazine has to be the Hellost campaign, though. It takes up quite a chunk of the issue and will provide some inspiration for many, I think. A shout out must go to the front cover, too. Kai Lim's cover has a hint of Kev Walker about it, and the spot varnish has been used to great effect to enhance the image.

So, that's just about it for this week. Just one more thing. I was in my local Poundland the other day, stocking up on those amazing not-Toblerone Twin Peaks choccy bars and I grabbed these two paints. 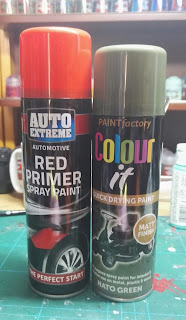 They're an absolute bargain at a pound each. I use Poundland sprays for a lot of my undercoating (I'd use even more if they did a matt white...) and I thought I'd see what these came out like. I did a test spray on some paper to see what the colours are like, and you can see the results below.
The Poundland paints are on the right of each picture, with Citadel sprays on the left of each (Death Guard Green and Mephiston Red respectively) to compare them too. As you can see, the Poundland green is a little too bright and yellowy and the red a little too flat and brownish for them to be straight replacements for the Citadel paints but I'm sure they may come in handy and for the price...

Finally, a quick word about you-know-what. Obviously, this is a very difficult time for everyone and for some more than others. I've had to cancel a week away with The Better Half, during which we were going to scatter my dad's ashes in the place he wanted to be, alongside my mum. Not being able to do that has been a bit of a blow but it could have been much worse. As care support workers, The Better Half and I  have a "safe" job and, as long as our health remains good, our lives will be fairly unaffected by what's happening. Others are not so lucky.

There will be people in isolation, some that will not be able to get out and about. There will be people who are scared and alone, and those that will be suffering hardship or loss. I dread to think how my dad would be if he was still living in his flat, getting all his news from the tv. And what would have happened to him had I been unable to do my daily visits for two weeks just doesn't bear thinking about. Please, if you have vulnerable people living near you, family or otherwise, offer them what help you can. Do their shopping, pick up their prescriptions, or just pop in and see if they're okay. Also, support your local businesses in every way you can because they are the ones that will feel the pinch the most. Big companies will weather the storm, mostly, but sole traders, small businesses and the self-employed, particularly those in the gig economy, or those who depend on other businesses to survive, will be hit hard. Do what you can. Be good people. Help each other.

Okay, that's me done for another week. apologies that today's post was a little late. I had a few technical difficulties and it's been a busy few days...Keep safe everyone. Next week I'll have an update on my Mortal Realms situation.

Thanks for reading!
-Stu
Posted by Stuart Thomas at 23:21