The GW Week: SO MUCH NEWS THINGS!!!

Well, it's been quite the week for the ol' rampaging juggernaut that is Games Workshop!

The week started off with the return of an old favourite, The Red Gobbo! Fronting a new promotion for the festive season, this new version sticks quite closely to the old miniature and I cannot wait to get my hands on him. For those who don't remember the original, here he is (painted by yours truly 20+ years ago) next to his new incarnation. I urge everyone to participate in the promotion, and follow The Red Gobbo on Twitter, as there may be more giveaways to come...

Next up was a sneak preview into what's coming up for Warcry. With the warning that the starter set would not be around forever (in it's present form, nudge nudge wink wink) there was the announcement that the scenery from the starter set would be made available separately as the Azyrite Ruined Chapel. Also announced was  another supplement book, detailing the other factions that can be used in the game* in the Tome of Champions. Now, the fact that this book has 2019 written on it makes it fairly obvious that this is the first of an annual series of books for the game, much like the Blood Bowl Almanac. This is A Good Thing as it points to the commitment to support the game into the future, and leads me to wonder why they have not done something similar Kill Team. Maybe something like that is planned...There's more for Warcry, too. We got our first look at one of the miniatures for the two remaining, as yet unseen warbands, the Spire Tyrants. I have to admit to being a bit underwhelmed by this miniature. It's very generic Chaos warrior-ish when compared to the existing warbands but I suspect it's just a basic footsoldier and that the character models will show more individuality. We also got a look at the Fomoroid Crusher, and this is very interesting. Stylistically it feels very different from other AoS races and the name harks back to the old Fomorians of legend, which could mean we may see some sort of AoS-ing of the Fimir some time down the line. It does look like the beastie just has one eye...Also interesting to note is that this is touted as the first of "all manner of monstrous horrors on the way". Sounds very interesting indeed.


There was more from The Psychic Awakening, with a short story by Melissa Roddis and a look at the upcoming miniature of DrazHar, The Master Of Blades. 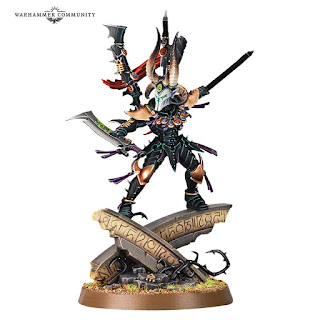 The previews of this 40k event just keep on building and I'm very interested to see what the final payoff will be. Some are suggesting that it will be like The End Times and will cause a complete reboot and reworking of 40k, as that campaign ushered in the death of Warhammer Fantasy and the creation of Age of Sigmar. I don't see it myself. The Old World was destroyed because it had been stagnant for years and the game, system and miniature range was somewhat in the doldrums. 40k is not in that situation at all and I can't see GW casually chucking it all in and starting over, but I can see a significant moving forward of the story happening, and I think it will all tie in with the much-touted return of the Sisters of Battle.

Speaking of which...
The latest installment of the Battle Sister Bulletin focussed on the Penitent Engine, a new version of an old favourite. The background to this piece of kit is as grimdark as 40k gets and it's an auto-include in any fluffy list. The old one was a bit of a pig to put together, so it's really good to finally see it realised in plastic. I hope there's options for different pilots, though (although I can see there being a lot of conversions done of this particular miniature...) 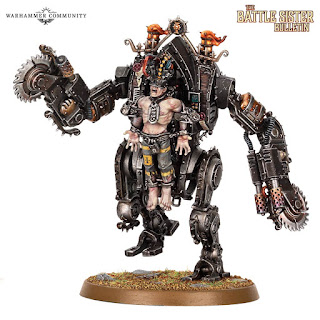 The other news regarding the Sisters of Battle is that the, to prepare for the launch of the new plastic range, the old, metal miniatures are on the way out, and your last chance to buy them is now...

The last piece of news on a particularly busy Monday was a big one. The announcement that GW is partnering with Marvel Comics to bring some Warhammer comics to the shelves. I am really excited by this. Previous efforts to do comic strips of the various Warhammer properties have not really set the world on fire, despite some laudable efforts and some big-name creators being involved. Even GW's own Warhammer Monthly anthology comic, published by Black Library some years ago, failed to make a massive impact. As long as they stick to the source material well, and GW are given the right amount of creative input, this could be A Really Good Thing. Marvel have the clout and creative power to really take the license and run with it and, just as importantly, bring Warhammer to the attention of a whole new audience. There are some who are saying that this is the first step towards the inevitable Disney buy-out of GW. I can't see it going that far but, with it could be the first step to much bigger things for Warhammer. Along with last week's unveiling of the first GW/Bandai collaboration, with the large-scale Primaris action figure, this news marks some incredibly interesting and exciting developments for Warhammer, beyond the tabletop games, which can only ever be a good thing.

After such a busy Monday, it would be easy to overlook the announcement of upcoming events at Warhammer World and around the globe. It looks like GW are really expanding their table of their own events, with the addition of the Citadel Colour Open Day (which will include the announcement of the winner of the Everchosen painting competition. I wish I could get up there for that one. On the subject of painting competitions, it's the first week of the month, whcih means it's time for the monthly Warhammer Community painting competitions. Click on the pictures below to be taken to the individual Facebook pages for the terms and conditions and where to upload your entries.


That's about it for news this week. Time to take a look at the latest miniature pre-orders to tempt us...

From Forge World we hav e a couple of additions to the Horus Heresy Dark Angels. The Legion Praetor is looking suitably knightly, with his ornate sword and shield, and he's accompanied by the Leviathan Pattern Siege Dreadnought., here shown with A Cyclonic Melta Lance and Siege Claw. I rather like the Praetor, but I prefer him with the unhelmeted head I'm not a huge fan of the helmet design. He can also be equipped with a bolt pistol instead of his shield, but I think the sword and shield combo looks too good not to use.


Over on the main GW page, there's quite a lot of new stuff on pre-order this week, on top of the aforementioned Sisters of Battle last chance to buy.

For Warhammer Underworlds: Beastgrave comes the first of the new standalone warbands. The Grymwatch is a Flesh-Eater Courts warband, consisting of 6 Ghouls (including the leader of the warband, Duke Crakmarrow, shown below) and anpair of Harriers. Rules are also included so they can be used in Age of Sigmar FEC armies. 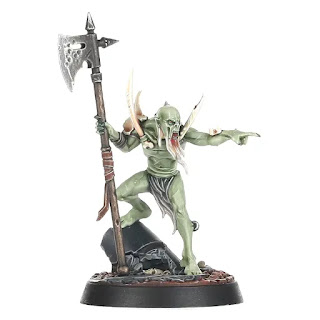 Roaring onto the Blood Bowl pitch are the Lizardman team, the Gwaka'moli Crater Gators (love that name...) It's good to see the old lizards getting some new models at last (come on GW, when are we going to see some new ones for AoS?) even if it is only for Blood Bowl, and these ones are really characterful sculpts. I particularly like the chameleon skink grabbing the ball with his tongue. The release is, as ever, supported by cards, dice and a pitch/dugout set, and their rules can be found in issue 7 of Spike! 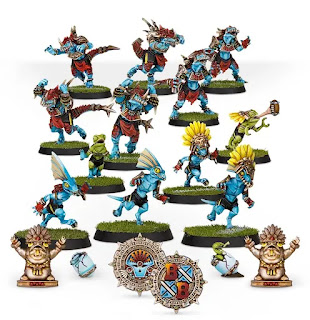 Warhammer Quest: Blackstone Fortress gets a couple of new(ish) releases this week. The Cultists of the Abyss and Servants of the Abyss are boxed sets of some of the Chaos miniatures from the Blackstone Fortress core game and Escalation supplement, and will be really useful in a Cultist army (come on, surely there has to be one on the cards...?) Speaking of cards, there's a set of cards, Abominable Intellect, to go with the miniatures releases, to ramp up the difficulty level of the missions.


I might have to get some of these to replace the Chaos Cultists in Assassinorum: Execution Force (which has sat, unplayed, on my shelf for I don't know how long...) and in my Death Guard army.

Finally, Middle Earth SBG gets a couple of new Heroes of Gondor for armies of Minas Tirith, in the form of Cirion and Beregond which are being released in metal. I have to admit, I don't really understand what is going on with the MESBG releases. There seems to be no rhyme or reason with regards to what miniatures are resin, metal or plastic, and whether they are Citadel or Forge World. I know that the whole Lord of the Rings game series pretty much passed me by, so I'm not sure what is a new release, what is a re-release, etc. but, honestly, if someone could explain the thinking behind the current release schedule, I'd appreciate it... 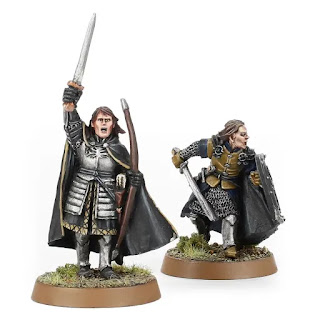 Did I say "finally"? How could I forget this guy?The Primaris Intercessor Action Figure is the first result of the collaboration between GW and the Japanese toy and model manufacturer Bandai. It's quite the thing. 8" tall with 50 points of articulation and interchangeable hands. I can imagine that at least some of these are going to end up repainted but many of them will likely remain sealed in the box. I have to admit this isn't my cup of tea at all (although I am very tempted by the chibi models they've previewed...) but with this, the POP Marines from a little while ago, and the Marvel Comics announcement, I'm really glad GW are starting to do these collaborations, allowing the licencees to do what they do best. It does the hobby no harm at all to raise awareness in other markets. 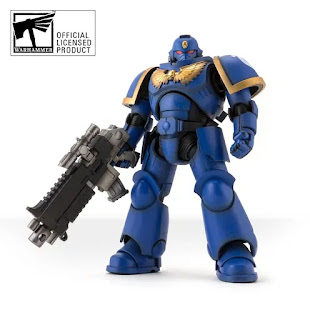 Right, that really is it for this week, and what a week it's been!
Thanks for reading!
-Stu