So, I finally got a copy of the Silver Templars book, which means I now have both the special edition books from Conquest and I thought this was the ideal time to give my opinion on them, especially as they are nw available to all through the Hachette website (despite previously being touted as "exclusive to subscribers.")
That "exclusivity" is something that must be addressed. When both of these products were released to subscribers the impression was given that these were a limited release, premium products (at a premium price) available only to those who had subscribed.* Creating the false need of the supposed exclusivity is a bit naughty. At least it screws over the scalpers, I suppose**. So, not exclusive at all, but what about the books themselves? 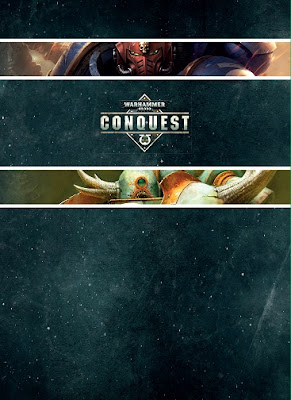 The first book released was a 64 page hardback art book. It's a very handsome thing, encased in a semi-matt hard slipcase, and the production values are very high. It's printed on high-quality stock, the cover is thick card, printed in the same semi-matt finish as the slipcase. The picture reproduction is very good and, although there doesn't seem to be any new art done specifically for this book, it is nice to see the artists getting credited next to the pictures. There are two niggles, though. The book is divided up into the two factions from the collection (Primaris Astartes and Death Guard) and 13 of the pages are made up of colour schemes for the two factions, with the illustrations being identical other than the colours. There's seven pages of these for the Astartes, with two per page, and six for the Death Guard, with only one per page. This is a bit of a waste of space, and could easily have been cut in half by reducing the images to 4 per page. The other niggle is the price. £14.99 is a bit much. If it was truly an exclusive, I wouldn't balk at that price. As a general release, I think it should be £12.99. Still, a nice thing, if not an essential purchase. 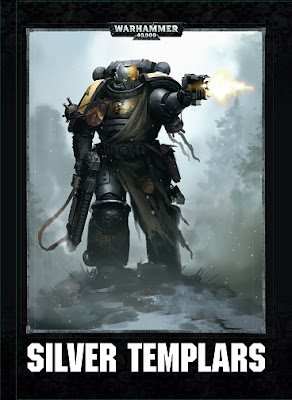 The second book released has proven to be a huge disappointment, as it is not the full Codex that a lot of people were expecting. Now, admittedly some of that disappointment has been self-inflicted, as Hachette never explicitly said it was a full Codex but, come on, it was easy to make the assumption. It looks like a Codex, the internal presentation is like a Codex, and a lot of the information within is exactly as it would be in a Codex. Oh, and it's priced like a Codex.
But it's not a Codex, it's a sourcebook. And that, frankly, is a bit of a swizz, especially at this price. So, what do you get for your twenty notes? Well, the presentation is as good as you'd expect. Hard cover, quality paper stock, good picture reproduction. You can't fault the production values, although it would've been nice if mine had been shipped in a card envelope, to avoid the kicking it got on it's way to me... Content-wise, there's the background of the chapter, history of the Astartes themselves, a guide to the chapter heraldry, a look at the chapter's exploits since their founding, a guide to their homeworld, notable characters, etc, etc. The background section is well-presented and detailed and just like you'd find in any Codex. I'm not sure if any of the artwork was created specifically for the book (other than a couple of icons), or if it's existing art that's been altered, but it does look good. The painted miniatures were, at least, definitely created for the book, and photos and painted miniatures are of the quality you'd expect. To finish off the book there's a short story. And that's about it. Everything that's here is as well-presented and of the quality that you'd expect. I have no problem with what's here.
It's what's not here. That's the problem.
the standard Space Marine Codex is only £5 more than this book, and you get 192 pages of not just the background, but a full army list, Stratagems, Warlord Traits, Chapter Relics and full rules. This is only 48 pages of just the background, a lot of which is lifted directly from the Warhammer 40,000 core rulebook and it's honestly not good enough. Where's the painting guide? The rules? The army list to make this a unique tabletop force? Even compared to the recently-released Codex Supplements for chapters like the White Scars, this comes up short. They contain everything you need to play the specialist chapters, clock in at half as many pages again as this book, and are £2.50 cheaper!
This book actually sums up the Silver Templars very well. They were a chapter that was created purely for this collection and then, for some reason, not utilized properly. An army was painted, artwork was done, background was written, then they've barely been used in the collection itself, overlooked in favour of the Ultramarines. A huge wasted opportunity, much like this book.
What really sticks in the craw, though, is the thought that I wouldn't be surprised if an actual Codex comes along as one of the later "exclusives" to the collection.
In terms of the content I knew what I was letting myself in for when I bought it, but I bought it for the exclusivity. I thought that would be my only chance to get it. Like the book itself, that exclusivity has turned out to be something of a let-down. And the price is a joke.
Oh, and the two books don't match on the shelf. Not even closely. Different sizes, different spines. That's bloody annoying, that.
For absolute completists only.


*I won't go into detail about the well-known issues with Hachette's customer service but except to say that I received both "opt-out" letters after I had already been invoiced and had paid for the books and, in the case of the first book, after the book had arrived. (The second book didn't arrive in the delivery that it should have, so the letter actually arrived before the book...)
**Mind you, it hasn't stopped them. One utter chancer is trying to get £99.99 for the Sourcebook (but at least postage is free)...
Posted by Stuart Thomas at 23:30